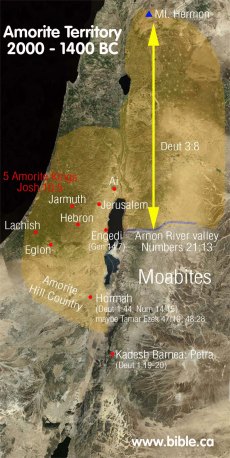 The Amorites, or Emorites, are another one of those Canaanite (descendants of Canaan, Genesis 10:15-16 is their introduction into the OT

15 Canaan became the father of Sidon (now Lebanon & one of the stops Jesus made), his first-born, and Heth (these are the Hittites among which the famous Uriah was one), 16 and the Jebusite (this is later reconquered by King David), the Amorite, the Girgashite (which literally means clay-dweller, not much else is out there on them unfortunately),

ethnic groups (which was formerly called tribes but that is now flagged as “biased”) that revered old Ba’al.  Their written language was Akkadian and like the Jews were  a Semitic_ tribe, and most likely from the Arabian peninsula. The reason they get so much prominence in these early OT, is that they were highly troublesome tribe of nomadic people who did not give in easily or quickly to the armies of Joshua. That’s an important thing to note, that the wars were long, fierce and drawn out and not a one-two punch as much tend to think so it was a constant battle against them.

To read more about them look over here which gives their history which is actually quite long.  Another site, over here, lists all of the various ethnic groups mentioned in the OT including the Hittities, the Hivites, the Jebusites and the Sidonians and gives reference to when, where and why these groups keep showing up.  After a while these various references start making sense; the key is looking to the ant (Proverbs 6:6) and going slowly but thoroughly through them until it does…and then Eureka!  you’ve got it.

It’s Good Friday for those of us in the Eastern Orthodox faith btw.  Pascha is Sunday.  We do not celebrate “Easter”…but more on that then.