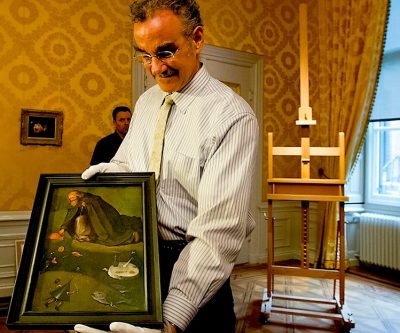 The newly discovered painting ‘The Temptation of Saint Anthony’ believed to be by early Netherlands painter Hieronymus Bosch is presented at the Noordbrabants Museum in Den Bosch, The Netherlands, February 1, 2016. The painting, dated 1500-1510, had previously been attributed to the workshop of Bosch or to a follower, is owned by the Nelson-Atkins Museum of Art in Kansas City, Kansas
The story of St Anthony of Egypt, the father of Christian monasticism, is a vivid one in the early annals of Christendom. It begins with Anthony going into the desert to avoid all temptations of man and Cairo, and so purify himself following Christ’s lead in Matthew 4 where He went int othe Wilderness.

1 Then Jesus was led by the Spirit into the wilderness to be tempted there by the devil.

2 For forty days and forty nights he fasted and became very hungry.3 During that time the devil came and said to him, “If you are the Son of God, tell these stones to become loaves of bread.”

4 But Jesus told him, “No! The Scriptures say, ‘People do not live by bread alone, but by every word that comes from the mouth of God.’

”5 Then the devil took him to the holy city, Jerusalem, to the highest point of the Temple,6 and said, “If you are the Son of God, jump off! For the Scriptures say, ‘He will order his angels to protect you. And they will hold you up with their hands so you won’t even hurt your foot on a stone.’ ”

7 Jesus responded, “The Scriptures also say, ‘You must not test the Lord your God.’ ”

8 Next the devil took him to the peak of a very high mountain and showed him all the kingdoms of the world and their glory.9 “I will give it all to you,” he said, “if you will kneel down and worship me.”10 “Get out of here, Satan,” Jesus told him. “For the Scriptures say, ‘You must worship the Lord your God and serve only him.’ ”11 Then the devil went away, and angels came and took care of Jesus

The stories Antony told were vivid and and those who witnessed them were convinced they were real that he got followers emulating his walk as well.These monks considered themselves the vanguard of God’s army, and, that by fasting and performing other ascetic practices, they were atempting the same state of spiritual purity and freedom. Anthony’s spiritual combats with what he envisioned as the forces of evil made his life one long struggle against the Devil.

According to St. Athanasius, the great bishop of Alexandria, the Devil’s assault on Anthony took the form of visions, either seductive or horrible and at times the Devil appeared in the guise of a monk bringing bread during his fasts; at other times the Evil One took the form of wild beasts, women, or soldiers; and then when that failed they would beat Anthony and leave him for dead. You can here at retelling of St Athanasius’s tale of St Anthony the Great, here, also on the Internet Archive.

What was so compelling was that every vision conjured up by Satan was repelled by Anthony’s fervid prayer and penitential acts. So exotic were the visions and so steadfast was Anthony’s endurance that the subject of his temptations has often been used in literature and art, notably in the paintings of Hiëronymus Bosch (see above) Matthias Grünewald, Max Ernst, Paul Cezanne, and Salvador Dalí as well as in the novel The Temptation of Saint Anthony (1874) by Gustave Flaubert which can be read in full here over at the Internet Archive. Flaubert felt this was his most important novel; critics did not agree.

So from all these psychic struggles, Anthony emerged as the sane and sensible father of Christian monasticism. The rule that bears his name was compiled from writings and discourses attributed to him in the Life of St. Antony (by Athanasius) and the Apophthegmata patrum is still observed in the 20th century by a number of Coptic and Armenian monks. You can read the Rule here. The first and prime rule of Saint Anthony is that

“The Rule [itself] is not intended to be a source of division and condemnation but rather an instrument of communion…It is not to be an end in itself but a temporal means [or vehicle] towards our eternal life in heaven. Members bind themselves to the Rule, and the Rule defines them. The ‘Order’ is simply the Rule in practice, and its members are those who practice it.”

Now the reason that the painting by Hëronymus Bosch, [also spelled Jheronimus Bos was pseudonym of Jeroen van Aeken, (born c. 1450, ‘s-Hertogenbosch, Brabant [now in the Netherlands]—buried August 9, 1516,] is important because his work reveals an unusual and very individual complex iconography. While a pessimistic and stern moralist, he had neither illusions about the rationality of human nature nor confidence in the kindness of a world that had been corrupted by human presence in it. His paintings are sermons on folly and sin, addressed often to initiates and consequently difficult to translate.

Unable to unlock the mystery of the artist’s works, critics at first believed that he must have been affiliated with secret sects. Although the themes of his work were often religious, his choice of symbols to represent the temptation and eventual ensnarement of humans in earthly evils caused many critics to view the artist as a practitioner of the occult arts. More recent scholarship views Bosch as a talented artist who possessed deep insight into human character and as one of the first artists to represent abstract concepts in his work. A number of exhaustive interpretations of Bosch’s work have been put forth, but there remain many obscure details.

Bosch’s The Temptation of St. Anthony displays his ascent to stylistic maturity. The brushstrokes are sharper and terser, with much more command than before. The composition becomes more fluid, and space is regulated by the incidents and creatures that the viewer’s attention is focused on. His mastery of fine brush-point calligraphy, permitting subtle nuances of contour and movement, is fully evident. Bosch portrays the human struggle against temptation, as well as the omnipresence of the Devil, in his St. Anthony, one of the best keys to the artist’s personal iconography.

The Egyptian hermit saint, St Anthony is the founder of monastacism, is cast as the heroic symbol of humankind. In the central panel St. Anthony is beset by an array of grotesque demons, their horrible bodies being brilliantly visualized amalgamations of human, animal, vegetable, and inanimate parts. In the background is a hellish, fantastically bizarre landscape painted with the most exquisite detail. Bosch’s development of the theme of the charlatan deceiving humans and taking away their salvation receives its fullest exposition in St. Anthony, with its condemnation of heresy and the seductions of false doctrines.