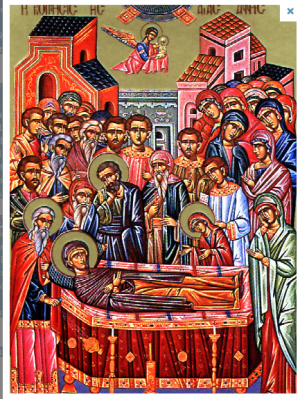 Saint Anna was the daughter of the priest Matthan and his wife Mary. She was of the tribe of Levi and the lineage of Aaron. According to Tradition, she died peacefully in Jerusalem at age 79, before the Annunciation to the Most Holy Theotokos.
During the reign of St Justinian the Emperor (527-565), a church was built in her honor at Deutera. Emperor Justinian II (685-695; 705-711) restored her church, since St Anna had appeared to his pregnant wife. It was at this time that her body and maphorion (veil) were transferred to Constantinople.
Portions of St Anna’s holy relics may be found on Mount Athos: Stavronikita Monastery (part of her left hand), St Anna’s Skete (part of her incorrupt left foot), Koutloumousiou Monastery (part of her incorrupt right foot).
Fragments of her relics may also be found in her Monastery at Lygaria, Lamia, Crete and in the Monastery of St John the Theologian at Sourota. Part of the saint’s incorrupt flesh is in the collection of Saints’ relics of the International Catholic Crusaders. The church of St Paul outside the Walls in Rome has one of the saint’s wrists.
St Anna is also commemorated on September 9.