Ayatollah Ali Akbar Hashemi Rafsanjani, a former president of Iran and a founder of the Islamic republic, who navigated the opaque shoals of his country’s theocracy as one of its most enduring, wiliest and wealthiest leaders, died on Sunday in Tehran. He was 82.   His death was announced by Iranian state television.

Rafsanjani seesawed through periods of revolutionary zeal and confrontation with powerful conservative rivals, a ruthless player in the Iranian power struggles he was protected by his association with Ayatollah Ruhollah Khomeini, the revolutionary leader who overthrew the shah in 1979.

Argentina has accused Rafsanjani and other senior Iranian figures of complicity in the 1994 bombing of a Jewish community center in Buenos Aires, in which 85 people died.

In 1997, a German court concluded that the highest levels of Iran’s political leadership had ordered the killing five years earlier of four exiled Iranian Kurdish dissidents in Berlin. The events added weight to American assertions that Iran was a sponsor of terrorism.

Mr. Rafsanjani’s clout declined  during the presidency of Mahmoud Ahmadinejad who was a populist conservative, Ahmadinejad had a strong following among poor Iranians, many of whom resented the affluence of Mr. Rafsanjani. 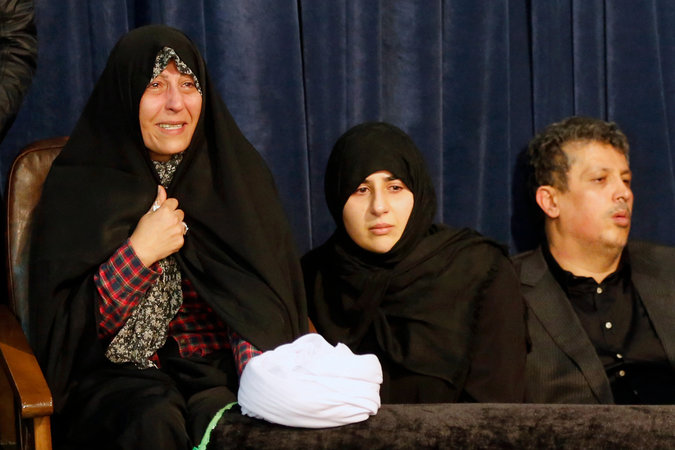 Faezeh Hashemi Rafsanjani, left, with relatives and mourners around his coffin during a memorial ceremony

Born August 25, 1934, in Qum, Iran, Rafjansani was sent as a four year old boy to be a disciple of Ayatollah Khomeini, himself a student of he renowned Islamic scholar Yazdi Ha’iri.  Ha’iri died in the 1930s, and Ayatollah Boroujerdi succeeded him. Khomeini swore his allegiance to the new Ayatollah as did the young Rafjansani. We do not know much about Rafjansani at this point, but when thirty years later, Boroujerdi died on March 31, 1961, Khomeini encouraged people to see him as as Marja-e Taqlid (a person to be imitated) and this of course raised Rafjansani’s stature.

As the new religious leader, Khomeini broke with his mentors and decided to take an active stance against the Pahlavi regime. This led his deportation to Turkey though because of conflicts with the Turkish authorities and he went to Najaf, Iraq in September 196, remaining there for the next 13 years. Rafjansani stayed in Tehran but in contact with his teacher.

While muckraking in Tehran, Rafjasani married Effat Marashi in 1962. Her family had many respected Shiite clerics and was considreed a good match. They had five children — two daughters, Fatemeh and Faezeh, and three sons, Mohsen, Mehdi and Yaser.

When Khomeini returned to Iran, Mr. Rafjansani as his spokesman,was elected to Parliament, known as the Majlis. He rose to be speaker of that august body,serving in that position until 1989. Very quickly, Rafsanjani built a family business empire that owned Iran’s second biggest airline, exercised a near monopoly on the lucrative pistachio trade and controlled the largest private university, Azad and numerous real estate holding, construction companies and participated in many lucrative oil deals.

In 2011, Iran sided with President Bashar al-Assad of Syria during the Arab Spring, along with the Hezbollah Shiite militia in Lebanon, setting Tehran against Mr. Assad’s Western adversaries, including the United States.

By 2014, Rafsanjani was drawn into a ferocious debate over a meeting between his activist daughter, Faezeh, and Fariba Kamalabadi, a leader of the Baha’is, a minority religious group regarded by the clerical hierarchy as impure pagans.Mr. Rafsanjani showed little sympathy for his daughter, calling the Baha’is “heretics” and saying publicly that his daughter had “committed a wrong deed” and should be ashamed of herself.