the tomb of Xerxes I built by his son, Artaxerxes i 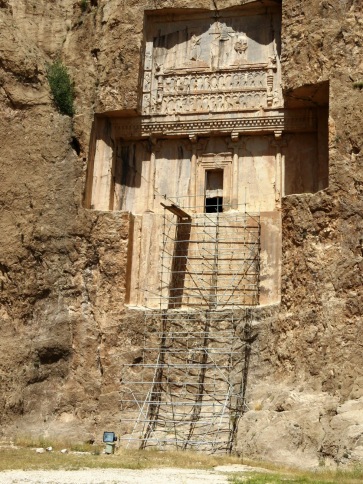 Books 1-7 of Nehemiah  are considered his memoirs.  Books 8-12 are  thought to be editted later by the prophet Ezra, but that is problematic because Ezra is traditionally, Ezra (Esdras I+ II) is considered to have been in Jerusaleum thirteen years earlier than Nehemiah, and Ezra does not a does not mention the other.  For that matter Nehemiah does not mention Ezra much either but the “excuse” there is that Nehemiah is rather myopic and only concerned with his own affairs.

Nehemiah arrived in Jerusalem in 445 as governor of Judah, appointed by Artaxerxes I
(died 425 bc, Susa, Elam [now in Iran]), the Achaemenid king of Persia (reigned 465–425 bc). Artaxerxes in Greek is Macrocheir (“Longhand”) and in Latin Longimanus. He was the younger son of Xerxes I and Amestris, & enthroned not by his father, Xerxes I, but by the commander of the guard, Artabanus, who had murdered the king.

After secession, Artaxerxes slew Artabanus in a hand-to-hand fight. His reign, was disturbed by several insurrections: the first was the revolt of his brother the (Persian for political governor) satrap of Bactria. Then there was the rebellion of Egypt under Inaros, who received assistance from the Athenians.

As evidenced by his support of Nehemiah, Artaxerxes was indifferent to the Jews. His tomb is at Naqsh-e Rustam, about 12 km northwest of Persepolis, in Fars Province, Iran where a group of ancient Iranian rock reliefs are cut into the cliff, from both the Achaemenid and Sassanid periods.

As governor or satrap, Nehemiah had authority over all the Jewish activities, including all aspects of religious life. He succeeded in rebuilding the wall of Jerusalem despite the hostility of neighboring nations; he reorganized Judah economically (Neh. 5) and restored the cultic activities which had fallen into disuse after the departure of Ezra.

During Nehemiah’s twelve-year stay in Jerusalem, Ezra returns and supports Nehemiah’s attempts to carry through his reforms which explains why  Ezra is mentioned in the second part of Nehemiah’s memoir (Neh. 12).  But then Ezra disappears and no one mentions where or why.  He ay have returned to Susa, the capital of Persia but he is not mentioned in connection with Nehemiah’s second arrival in Jerusalem, c. 430. 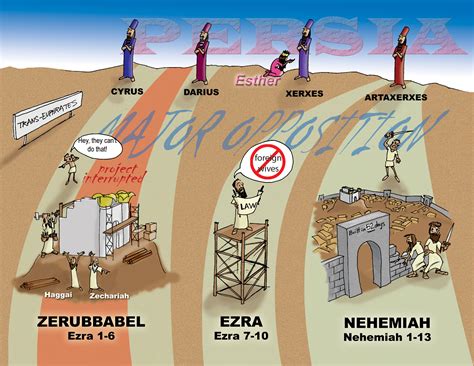 The same problem happens though with Nehemiah — what happened to him?  After the reforms of his second term is also a mystery. The sources break off at c. 430 after the temple was rebuilt, the wall of Jerusalem restored, and the cultic activities organized. Of course that does not last long either.