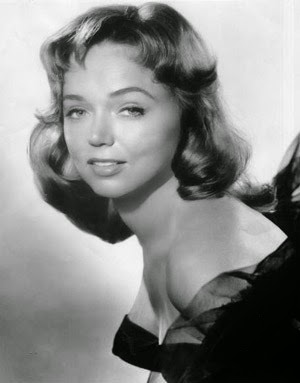 I read this article on The Atlantic online, having missed the original “viral” story of Yvette Lola Vickers death.  I have to admit, it really hit home a long time fear of mine — you or someone you know has died and no one knows.  I think that is because it has happened to me; a friend died and I was not contacted, at least twice.  The first time was the worst.  The second time at least his wife, Karen, was polite enough to contact everyone in his email contact list and let us know.  Both times it was a shock.

YVETTE VICKERS, A FORMER Playboy playmate and B-movie star, best known for her role in Attack of the 50 Foot Woman, would have been 83 last August, but nobody knows exactly how old she was when she died.  You can see the movie over here on Youtube.
According to the Los Angeles coroner’s report, she lay dead for the better part of a year before a neighbor and fellow actress, a woman named Susan Savage, noticed cobwebs and yellowing letters in her mailbox, reached through a broken window to unlock the door, and pushed her way through the piles of junk mail and mounds of clothing that barricaded the house.

Upstairs, she found Vickers’s body, mummified, near a heater that was still running. Her computer was on too, its glow permeating the space.

Of course you think, if you believe in God it doesn’t matter, where or how you die, d so I admit it is not for me that I worry. I know this sounds perverse but I worry, almost to a point of idiocy, about V. He is estranged from his family and while I know after our separation he met people through the Catholic Church, I don’t know much about them as he would not tell me, worried I would poison their minds with tales of his deeds. I was always outraged by those comments. I would not  do that & you would have to think he knows that by now.
I have never told a soul about him throughout our marriage that did not make him look good. I never said anything negative about him but always looked for the best.  Why?  Well the main reason is, I think, is that I believe what I say.  I ignore the worst about him and only discuss the best.  Sometimes I would like to say the worst, scream it, but then I think, what would be the point?  So I don’t.
I also tend to think about the importance of second chances, Ingmar Bergman’s Wild Strawberries, (click on the link to view the Criterion issue  — turn on the subtitles unless you understand Swedish) and so while it’s been a long time since I’ve heard from him, I tend to want to ask him like some child who has had a terrible fight with their best friend, Can’t we just be friends, so I know you are ok?
I can hear him scream back, No.
Still it is hard to break that habit of caring and loving someone. It feels like a death but that there are no mourners. I feel alone, so cut off like a person who has an amputated limb that they carry around in case someone can sew it back on.
I begin to wonder and think, is it me that is really cut off and I’ve transposed this to V?My inability to hear “Poor thing” ala the psychiatrist in Harvey while sitting under a cool tree in a park in Akron Ohio drinking cold beer on a hot summers day; to get sympathy — closure. Perhaps it is me that is worried and in mourning, not for him, but all that time I put in that …was not respected.
Does Death respect anyone ? Anything. I dunno my emotions are a muddle and it is ridiculous that this could all be about self-pity, but you have to wonder where one starts and the other begins.
Still, loneliness is slippery, a difficult state to define or diagnose. The best tool yet developed for measuring the condition is the UCLA Loneliness Scale, a series of 20 questions that all begin with this formulation: “How often do you feel …?” As in: “How often do you feel that you are ‘in tune’ with the people around you?”
And: “How often do you feel that you lack companionship?” Measuring the condition in these terms, various studies have shown loneliness rising drastically over a very short period of recent history. A 2010 AARP survey found that 35 percent of adults older than 45 were chronically lonely, as opposed to 20 percent of a similar group only a decade earlier.
According to a major study by a leading scholar of the subject, roughly 20 percent of Americans—about 60 million people—are unhappy with their lives because of loneliness. Across the Western world, physicians and nurses have begun to speak openly of an epidemic of loneliness.
The new studies on loneliness are beginning to yield some surprising preliminary findings about its mechanisms. Almost every factor that one might assume affects loneliness does so only some of the time, and only under certain circumstances.
People who are married are less lonely than single people, one journal article suggests, but only if their spouses are confidants. A belief in God might help, or it might not, as a 1990 German study comparing levels of religious feeling and levels of loneliness discovered.
Active believers who saw God as abstract and helpful rather than as a wrathful, immediate presence were less lonely. “The mere belief in God,” the researchers concluded, “was relatively independent of loneliness.”
Snippets from the Atlantic. You have to wonder where they get these crazy ideas from…a “wrathful” God? No where was there listed a loving merciful God. Now there is an Abstract Supreme being listed but no loving kind Jesus, and so you have to ask, do these studies tell us anything about us or a lot about them?
Most of the article continues like that…assuming that the facts are real and that nothing caused them and I guess if you look at life with no thoughts, no backward glances, no causation that is what you get…but you also get cut off, unaware of your thoughts inside that haunt you and alas, no second chances.