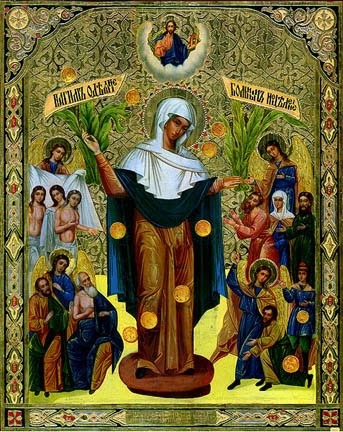 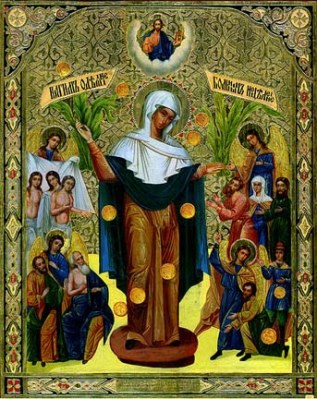 Today we have an interesting celebration: that of honouring an icon for Mother of God  called the “Joy of All That Sorrow”.  The icon was inspired by the hymn of the same name.
What made it a note worthy icon, was the miracle that took place in a church named Holy Theotokos
that was not far from a glass factory, in 1888.

When it was turned over, the image was found to have become fresh and clear, where previously, when originally found on the banks of the Neva,it had been dark and pitted. Now too, bronze coins from the alms box were sticking to its surface.

Its “Renewal” was seen as a sign from heaven, and its fame spread.Since then, the icon has been commemorated on Gregorian calendar of July 23rd or July 10th on the Julian Calendar.  You can see pictures of the church and the original silver ikon here.  The one above, is a popular reproduction that is often found in Orthodox homes and churches.